Greetings everyone!‌‌ A third major update of October has now been released - Patch 4.9 - The Black Market.

Similar to the recent Patch 4.8, this update focuses primarily on implementing community suggestions based on the recent community survey, and the usual Discord suggestions. Let's get into the changes and additions!

To celebrate this new update, there is currently a 20% OFF sale on all crates and keys. The sale ends on Monday, October 31st. Check it out here: https://store.mineraze.net/

This is also a reminder that the Halloween Event ends on November 1st when all Halloween items will become unobtainable.

This is a new 'hidden' area in spawn, underneath the Forge building, where you will be able to find valuable custom items - effectively tier 4.5 items.

Many players made it known that the existing Tier 5s from the Forge was not quite up to par with recent event items. This aims to change that. The new Corrupted Dragonscale items should be on par, or better than most of the existing event items and serve as a long-term goal for players to work towards.

The Black Market will be updated again at the start of 2023 where the Prestige 3 armor, gear, and tools will be released. An exclusive, very expensive, and powerful set for players who manage to reach Prestige 3 in-game.

With these new items, a new system has also made its debut. Account Bound. You will find this on many of the most powerful items from this point forth. As its name reveals, this means the items will be bound to your account.

Many players noted that the top 3 damage rewards haven't been quite as useful as the economy on the server has evolved. This update aims to change that by massively increasing the amount of money earned from being one of the top three damage dealers in an active Dungeon.

The rewards for the top 3 most damage dealers have been significantly increased.
Mythic Dungeons have been doubled.

The Builder job has had new blocks added such as:

You are now able to find sell boosters to the Vanilla Merchant (Jens) from in-game ranks. If you already have these ranks unlocked, you will have these new perks immediately as you join today. If you haven't yet, you'll unlock them as you reach the rank. These boosters do not stack with each other.

Thank you for your continued support! Development of the next major update is already underway - The Thanksgiving Update, which will bring a new mini-event, and more. Check Discord for teasers! 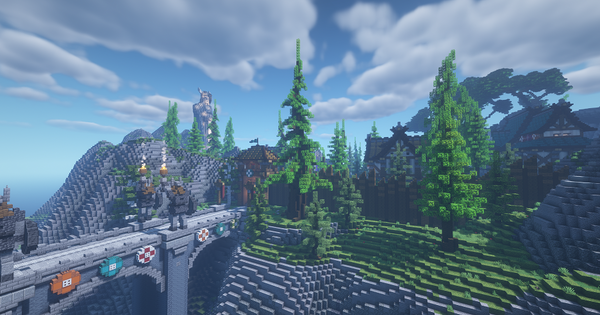 Server IP: play.mineraze.net‌‌ Website: https://www.mineraze.net/ ‌‌Discord: https://discord.gg/mineraze‌‌ Store: https://store.mineraze.net/ Greetings everyone!‌‌ A new update is now live on the server. The primary focus of this update has been implementing most of the heavily favored community suggestions. Let's get into